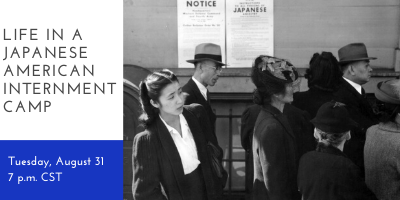 In 1942, following Pearl Harbor, members of Sarah Okner’s family along with more than 120,000 other people of Japanese heritage living on the west coast were forcibly removed from their homes and relocated to remote camps where they would spend the rest of the war.

Historian and librarian Sarah Okner brings together first-hand accounts from her grandparents with 15 years of research to illustrate the details of daily life in these camps, explore the political climate that led to the executive order that incarcerated thousands of innocent American citizens, and demonstrate the profound effects it had on those living there.